The President of the Republic together with his Mozambican counterpart push to accelerate extraction activities that see various Italian companies such as Eni and Saipem at the forefront. The importance of peace, recalled on the 30th anniversary of the Rome agreements, and words of condemnation for the Russian invasion 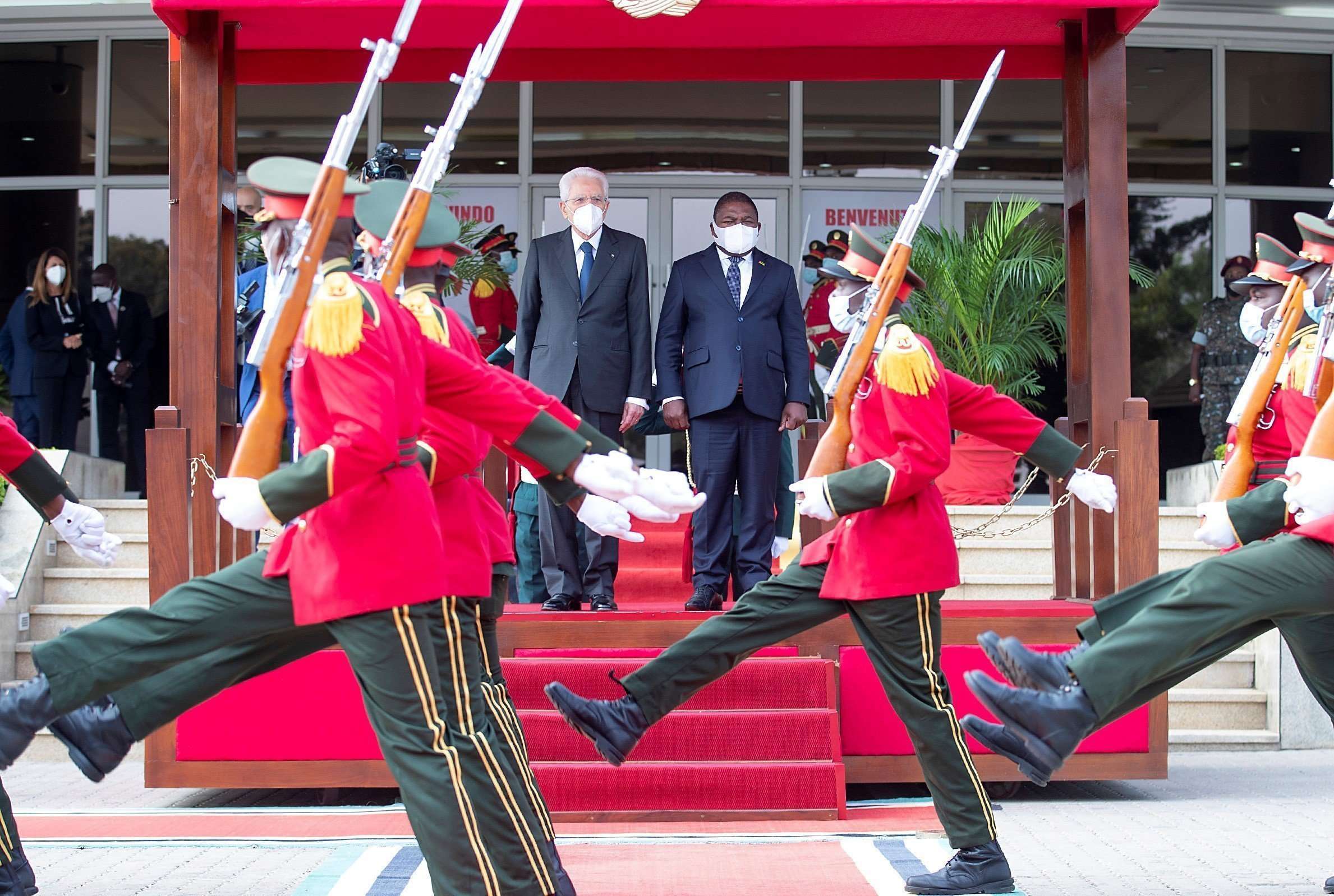 The historical friendship between the two countries and their respective energy contingencies meant that the first state visit to Mozambique by the President of the Republic, Sergio Mattarella, who was welcomed yesterday in Maputo by President Filipe Jacinto Nyusi, got off to a positive start. This was clear from the words used by the two heads of state at the press conference held at the end of the meeting in the presidential palace. In fact, both Mattarella and Nyusi explicitly mentioned the energy emergency that had exploded due to the Ukrainian conflict as common territory on which to work rapidly in the mutual interest.

In economics, this is called an equilibrium point and is found when supply and demand meet. Mozambique controls what is considered the second largest gas field in the world. It discovered it thanks to Eni a few years ago, but it has not yet come into production. Italy, on the other hand, has discovered due to the war in Ukraine that Russia is not the ideal partner to whom it can entrust 40 % of its energy needs. The balance point between the two countries was therefore easy to find. There is also the time variable that unites Italy and Mozambique. The two countries no longer have much of it. For different reasons, but both have to run, one to buy the other to produce.

Mattarella and Nyusi found themselves united by a genuine afflatus of esteem and friendship, the child of an ancient history, paved with positive legacies. Post-colonial and emergency cooperation, the Rome Peace Accords, which put an end to a long and bloody civil war and of which this year marks the 30th anniversary, are some of the milestones of a solid path of proximity. But if the outcome of this state visit can be called a success, it is due to the two presidents’ firm will to set a strong acceleration on the path of gas. The sooner it arrives the better for everyone.

This is why in the press conference they both explicitly referred to the development of Eni’s activities in Cabo Delgado as a top priority.  “The collaboration that takes place on the energy plan through ENI’s action,” said the Head of State, “is strategic. The forthcoming start of the export of liquefied natural gas from the Coral Sul plant, managed by ENI, is an important milestone that testifies to how valuable our collaboration is, and I hope it can be extended to other Italian companies”.

Eni plays a decisive role for the future of Mozambique. It is the Italian oil and gas champion that discovered the huge deposit in the north, in the waters off Cabo Delgado. A discovery that has changed the economic and social history of this country. Nyusi calls Eni’s CEO by name and Claudio Descalzi does the same with the Mozambican president: an intimacy that testifies to the friendship and esteem that binds the two men and the institutions they represent. After all, Italy is the main foreign investor in Mozambique, a commitment that will continue over time, given that, to give an example, Eni itself by 2024 could double its gas supplies from the current 3.4 million tonnes of LNG per annum (MTPA).

ENI, SAIPEM AND THE OTHERS, THE IMPORTANCE OF THE ITALIAN PRESENCE

But in Mozambique there is not only Eni. It is worth remembering this. The Italian system in this long country on the southern east coast of Africa is much more deeply rooted. Saipem, another leading Italian company in the design and construction of complex plant infrastructure, has signed an exclusive agreement with Mozambique’s National Hydrocarbon Company (ENH) for the monetisation of domestic gas. It means that when the gas is extracted by Total, another cumbersome player on the Mozambican energy scene with the even more cumbersome Americans of Exxon, then Saipem will have to undertake the retail sale and with part of the proceeds launch local economic development projects. This is an agreement of great strategic value for the Maputo government and great economic value for Saipem, a company that has recently reported heavy losses and, pending a change at the top, which is slow to arrive, is experiencing a difficult phase. 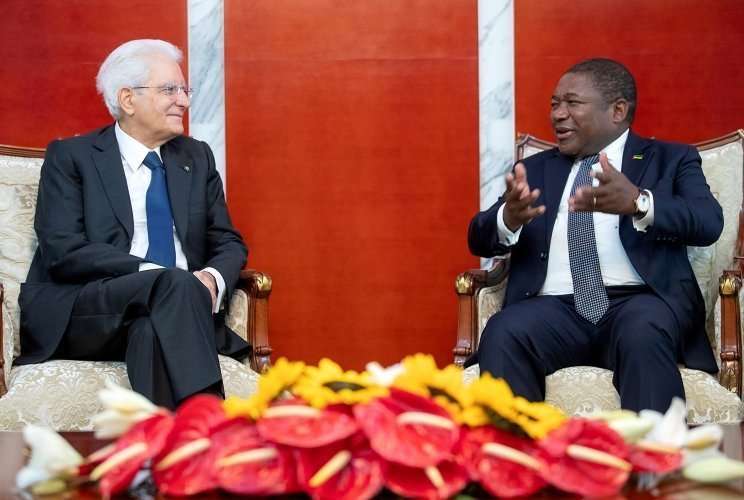 Signed in the presence of the Minister of Mineral Resources and Energy, Carlos Zacarias, this order can produce part of the 400 million ‘feet’ per day needed for industrial development projects such as methanol or urea. Saipem also took over the maintenance contract for the Coral flotation Nlg, which is in addition to Total’s project to build two onshore liquefaction plants.  A project that Total, however, has currently suspended due to the risk of terrorism, which still remains in the north of the country. It should also be remembered that the work of Eni and Saipem creates development and induced activities for many other Italian companies, such as Bonatti, Renco, Cmc, Leonardo Group, Rina, Prysmian, Faresin and Donelli.

In short, the Italian presence in Mozambique is a presence that can be felt. One of the most articulate and consistent in the whole of Africa and one that Mattarella, accompanied as always by his daughter Laura, wanted to strengthen from the outset. In fact, in the Conference Hall of the Presidency of the Republic of Mozambique, the cooperation agreement was also signed by Deputy Foreign Minister Marina Sereni. The ‘Multi-Year Indicative Plan (MIP) Italy – Mozambique 2022-2026’ focuses on five priority thematic areas. Namely health, job creation, agriculture, urban development and environment. With an indicative financial commitment of EUR 85 million for the first three years, of which EUR 35 million in grants and EUR 50 million in aid credits. An agreement that aims to harmonise the Italian commitment with the ‘Five-Year Programme of the Government of Mozambique (FPG 2020-2024)’ and the National and Sectoral Development Strategies.

THE VALUES OF PEACE – RUSSIAN AGGRESSION ‘CONDEMNED BY HISTORY’

In his speech, Mattarella then touched on other important social and humanitarian issues alongside the economic ones. Recalling the Rome agreements, the President of the Italian Republic dwelt at length on the values of peace. On that obtained by the Mozambican people at the cost of many lives, favoured by the Community of Sant’Egidio and signed in Rome in 1992, but also on the war in Ukraine.

‘The claim that there are zones of influence of the great powers,’ Mattarella said, ‘is out of touch with reality. It contrasts with the sense and value of peace that we intend to cultivate today, because we cannot and must not surrender to the custom of war. The aggression of the Russian Federation against Ukraine sees the re-emergence of doctrines such as militarism and imperialism, but they have already been ‘condemned by history’.

A Russia condemned by history are brave words that Mattarella uses to celebrate the Italian mediation that led to the Peace of Rome by bringing Mozambique back to life, but they are even more so because they remind us in an international context how much the Russian military invasion of Ukraine is a brutal act of aggression to be condemned always and in any case.

After President Nyusi’s repeated words of thanks and the handing over of the keys to Maputo, which is the highest municipal honour, it is clear how much Mattarella’s state visit has been appreciated and has achieved all its objectives. Italy is linked to Mozambique by a historical friendship and is always ready to help. Especially now that it desperately needs its gas to free itself from the Russian yoke. Mozambique, for its part, is gambling its future here and now. Either it accelerates and meets the demand of those who need its gas today, or in two years’ time, when the effects of the Ukrainian crisis will hopefully have subsided, it will be too late. He who stops is lost. In Maputo, the race has begun again.

Mattarella in Mozambique, state visit to a friendly country now crucial for gas