President Vincenzo Boccia: “We offer the best of Italian educational excellence and the best of international standards. And for our students the close link with the real needs of businesses is fundamental”. 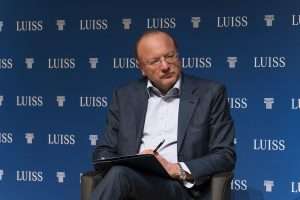 Luiss is confirmed in first place in the Censis Ranking of the best Italian universities 2022 among medium-sized non-state universities. The University named after Guido Carli is also among the top 25 universities in the world for Political and International Studies according to the QS World University Rankings. This is once again stated by the ranking of the best Italian universities published by Censis, the leading socio-economic research institute in Italy, which places the University named after Guido Carli at the top of the list of educational excellences, with a score of 93.2 and a gap of over thirteen points compared to the second ranked university. Rewarding the Libera Università Internazionale degli Studi Sociali for the third consecutive year were: internationalisation, scholarships, communication and digital services. Three elements in which Luiss has strongly invested in recent years. Unique among all non-state universities, the Luiss obtained the highest score under the heading of scholarships.

But that is not all. Three months ago, Luiss entered the world’s top 25 universities in the social sciences for the QS World University Ranking by Subjects 2022. In five years, the University has climbed 200 positions with great growth especially in the Political Studies area: the Luiss Department of Political Science, in fact, ranked 22nd in the world, 10th in Europe and first in Italy.

The University also ranked for the first time in the top 100 universities worldwide for Business & Management Studies and Law. The elements that continue to propel Luiss in its climb up the QS World University Ranking by Subjects are the international reputation of its researchers, the preparation of its graduates, who are increasingly appreciated by national and international employers, and the innovation of its teaching.

Increasingly competitive in the global academic community, strong in its internationalisation process with 315 partner universities in 65 countries and 58 agreements between double degrees and structured partnerships (LLM Educational Programmes, Joint Degree, QTEM Masters Network, Exchange), with more than 50% of its courses in English and around 40 nationalities represented on the teaching staff, the University has also recorded excellent results in the employment rate for graduates one year after graduation (over 90%). Moreover, according to the latest JobPricing survey, it is among the universities with the best career paths, both in terms of salary trends, with a 79% increase in salaries (+6% compared to 2020), and the proportion of graduates holding management positions (10.7%).

Vincenzo Boccia, president of the Roman university, “cashes in” on the excellent Censis and QS World University Ranking report cards and raises the bar: “We are very satisfied with the results we have achieved, but in the field of education of excellence it is important to always set ourselves more challenging goals, since competition in knowledge is global and we must be able to offer our students the best of the Italian educational tradition and the best of international standards. And the close link that Luiss has with the needs of businesses, which are changing faster than in the recent past, is the most important guarantee for the future of our students. And we are happy to welcome more and more of them from abroad’.

What is Italy’s role in the global ecosystem for innovation