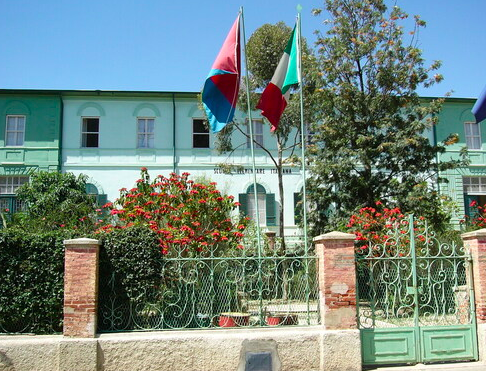 The Italian school in Asmara, the largest of the few schools that Rome has abroad and the oldest having started operating in 1903, seems to be definitively destined to disappear. A real pity. I have visited this schools and knowing that it is closing tightens the heart. The controversy between the Italian and Eritrean Governments about the Italian State All-inclusive Institute in Asmara today seems to be leading to a dead end that is the definitive closure of the school, at least in the management with Italian public guidance that it has had until now. The reasons for the crisis that lead to this sad epilogue actually have ancient roots and are the result of a series of misunderstandings, even if the closure of the institute takes place at the same time as the anti-covid measures. In fact, the Eritreans definitively revoke their licence when they are forced to observe that the Italians do not respect the local laws and forms in the slightest, but they go their own way, closing the school in advance and without agreeing with the competent Ministry. These procedures are perceived as yet another Italian discourtesy.

This is the spark that has led to the drastic closure. In reality the reasons for the split are deeper. The main one, needless to say, lies in the cutting of public funds to schools: the Education reform of 2017 and 2018 has in fact drastically reduced the financial contribution to training institutions abroad, which has had many consequences, including the impossibility of integrating the teaching staff and the consequent recourse to many replacements with teachers who are not native Italian speakers.

In short, it is a crisis that started from a long time ago, which has constantly decreased funds, but which in recent years has also been exacerbated by an unprofitable dialogue with our Embassy. A coldness of relations which has generated mistrust and which has only slightly deteriorated bilateral relations between Eritrea and Italy and therefore also led to the closure of the school.

An episode that in some way has also divided the minds at the Farnesina, among those who believe that despite the cuts, further efforts should be made to maintain good relations with countries such as Eritrea, which boasts an ancient and solid relationship with Italy and which in recent years has taken on a central role in the chessboard of East Africa, and those who do not see this opportunity and have taken the opportunity of the cuts and the clash on the anti-Covid procedures to favour a break-up that now seems definitive.

And to say that the Italian Prime Minister, Giuseppe Conte, was among the first Western leaders to go to Asmara to congratulate President Isaias Afewerki on achieving peace with Ethiopia and to promise commitment to improve relations between the two countries. A journey, that of Conte, appreciated by the Eritreans but which, however, did not lead to those further steps that were expected to unblock the crisis and reopen the Italian school. Now, beyond the question of responsibilities, the fact remains that Italy continues to lose positions in many key points of the globe, such as Libya, Saudi Arabia or Egypt, just to give three examples, instead of conquering them. A worrying trend that the Minister of Foreign Affairs, Luigi di Maio, seems to want to address and indeed seems to have put among his priorities.

It is no coincidence that one of the big names of the Farnesina, and it is just to give an example, the former Director General for the promotion of the Country System, Vincenzo de Luca, was appointed ambassador to India precisely to recover a situation that had deteriorated over the years, both because of an alleged scandal concerning the supply with corruption of 12 helicopters by Agusta Westland, a Leonardo group company, and because of the long and painful judicial queue concerning the arrest for murder of the two Italian Marò. In short, the Farnesina knows that the ambassadors serve to build bridges and not to destroy them and knows that when situations get complicated it has to spend its best men.

The closure of the Italian school in Asmara is a drama for a generation made up of 1500 young Eritreans who from one day to the next find themselves having to change their school and main language, but it is also a sign of an Italian foreign policy that must find a way to resume weaving its web, especially in friendly countries like Eritrea. Our main canvas has always been culture, teaching, the politics of doing. We have to start from here, for a school that closes because of problems that can be solved, we have to have the ability to implement a foreign policy that makes dialogue, exchange, inclusiveness and economic development its best weapons. For a school that closes down, we need to think about how to reopen it together with a hundred others.