22-point reform. An open and competitive country for international investment, with a focus on cost containment and a policy of growth. Applause from IMF, World Bank and international business community 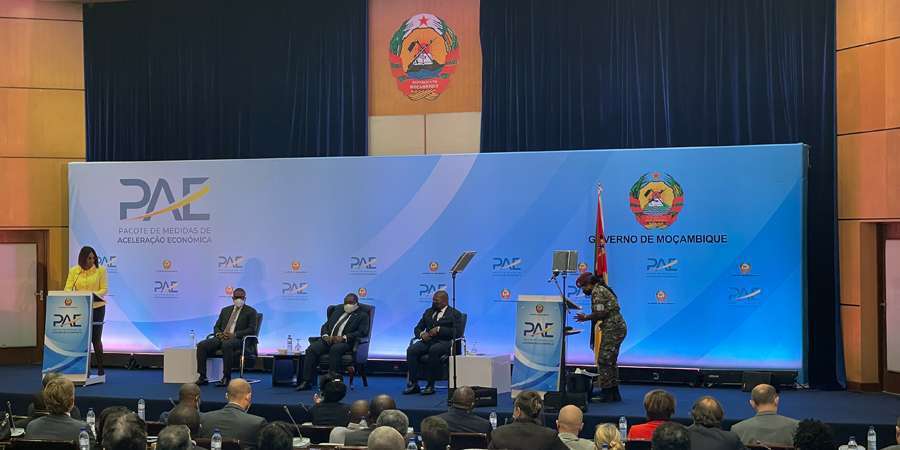 In front of a large audience of businessmen and institutional representatives, Mozambique’s President Filipe Nyusi, in a long-awaited speech to the nation and the international community, presented in the capital Maputo the new economic programme designed to accelerate the country’s growth. A reform plan set up with the Minister of Economy and Finance, Max Tonela, which aims to modernise the country, reduce living costs, encourage foreign and local investment, and use the incredible natural resources discovered in the last decade in a useful way for the country.

The programme, entitled ‘EAP’, i.e. ‘Programme for Accelerating the Economy’, is based on 22 measures divided into two sets of reforms, the first one of fiscal and economic stimulus and the second one of improving the business environment, transparency, governance, and accelerating strategic infrastructure.

But before highlighting the more technical points of the plan announced by President Nyusi, let us better understand what is new and of high political value. The premise from which the government starts is that Mozambique today has one of the largest gas deposits in the world, most of which has yet to be explored. Not only that. This is a country with various other riches: it has coal and rubies, it has an impressive agricultural potential that can be based on three annual harvests.

Starting from these premises, from these solid foundations of assets, the Maputo government has thus decided, among other things, to create a sovereign fund that will guarantee the next generations an optimal use of resources and the necessary investments for the infrastructural, technological and educational development of the country. And it is also with development in mind that it was decided to favour international trade by establishing that for 50 countries there will no longer be a need for entry visas. This is an important innovation that will guarantee easy and orderly access to foreigners, especially those who will come to Mozambique to work or make investments. The plan presented by Nyusi is designed to guarantee worthy pensions, a reduction in bureaucracy and a reduction in the tax burden.

The project presented by President Nyusi, characterised by this strong drive towards the economic, social and administrative revival of the country, immediately won the praise of the International Monetary Fund. A plaudit that takes on special significance if we consider that it comes just after the IMF itself restored credit and confidence to Mozambique, despite the historical difficulties now overcome and despite the contingent difficulties due to the Covid Pandemic and the war in Ukraine.

The World Bank also expressed itself positively, as did the positive comments from European investors, in Maputo represented by the European Chamber of Commerce (Eurocam): ‘a country that listens to entrepreneurs and improves the economic environment,’ they say from Eurocam, ‘is a country that points straight to its future. European entrepreneurs, who now account for the largest share of FDI in the country, are very satisfied with the reform plan’. It is no coincidence, moreover, that Italy’s ENI, together with the US company EXXON and other partners, will start producing and exporting liquefied gas in the coming weeks.

Returning now to the details of the measures announced, it should be remembered that the fiscal and economic stimulus measures include the reduction of some taxes with a direct impact on the main productive sectors. The measures are also, as mentioned, aimed at simplifying bureaucracy: from the use of the tax code to simplifying processes to attract new investments. Greater control over customs and tax evasion of mineral resources and the promotion of public building are also planned.

There are also many actions aimed at strengthening the private sector, including better access to credit (through subsidised lines), the strengthening and competitiveness of national logistical corridors, and the guarantee that a share of natural resource revenues will be kept in the regions of origin to foster the development of local content.

With regard to improving the business environment, transparency and governance, measures include stricter regulation of pension funds; structural improvement of the efficiency of public services; improvement of internal audits; and adjustment of labour laws and the visa regime.